When an automotive A/C compressor failure occurs, debris from the failed unit can scatter throughout the system.  These particles can clog up passages in the system and cause problems after you’ve replaced the failed compressor.  Even tiny particles can cause big problems with the system.  In fact, it takes less than 1/10th of a tsp of debris to completely restrict refrigerant flow in a typical system!  Flushing the system to eliminate these contaminants helps prevent damage to or seizing of the new compressor as well as the other existing parts of the system.

Many people flush their system annually even without a catastrophic compressor failure.  Flushing eliminates unpleasant odors, saves fuel and limits the need for future repairs.

Most A/C system flushes involves running a liquid solvent through the unit with vacuum pressure to clean the inside components of the system.   The A/C compressor must be lubricated at all times because it is a moving part, however, the oil is circulated throughout the entire system.  That means that all the components (condenser, hoses, tubes, evaporator, drier, accumulator) have an internal coating of oil.  Removing the oil (and the oil film inside these components) will eliminate all of the contamination from the AC system because the oil attracts and holds contaminants in place.

Finally, for a chemical-free flush, try the Power of Nitrogen: 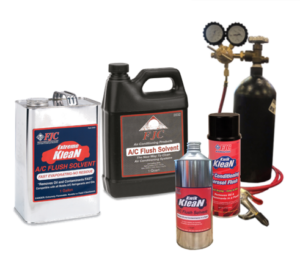 Remember, any foreign objects in the AC system can cause blockages and prevent the compressor from operating efficiently.   Flushing the AC removes the contamination and protects vital system parts. Don’t forget to flush if the system is contaminated or whenever the AC compressor is removed or replaced in your vehicle.