Many techs have not yet had much experience with R-1234yf refrigerant. That’s because it was only introduced in 2015, and most vehicles with yf systems have not yet needed servicing . In the coming years, however, you will expect to see a steady increase in the number of yf systems coming in for service, and so it’s important to understand exactly what you you’ll be dealing with, and how we got here.

R-134a was originally the replacement for R-12 which was phased out when it was found to be harmful to the ozone layer. Years later, R-134a was found to contribute to global warming, and now it too is being phased out . Enter R-1234yf. R-134a and R-1234yf do have many similar properties. That’s because R-134a is a hydrofluorocarbon (HFC) while R-1234yf is a hydrofluoro-olefin (HFO) refrigerant. Both are composed of hydrogen, fluorine and carbon atoms. However, there are notable differences between the two refrigerants as well. While R-134a has a Global Warming Potential of 1300, R-1234yf’s GWP is less than 1.
Another difference is that R-1234yf is classified as mildly flammable, but put into context, it is interesting to note that it still has the lowest flammability of any engine component-related fluid. 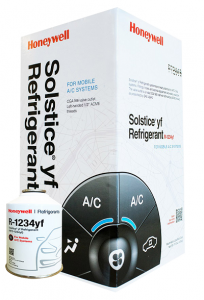 The refrigeration cycles of the two refrigerants are similar because the pressure /temperature relationship of yf and R-134a are very similar. Both require the use of an SAE J2842 evaporator. The procedures for recovery and recycling, however, is a bit more complicated with yf due to the sophistication of the equipment. Vehicles with R-1234yf have different service fittings than R-134a vehicles to prevent any potential cross-contamination of the two refrigerants. That means new equipment is required to service yf vehicles. That equipment must also be approved by, and registered with, regional EPA offices. SAE standard J2843, “R-1234yf (HFO-1234yf) Recovery/Recycling/Recharging Equipment for Flammable Refrigerants for Mobile Air-Conditioning Systems,” establishes minimum equipment requirements for the recovery/recycle/recharge of R-1234yf refrigerant. In addition, technicians need to be Section 609 certificated to buy and work with yf.

Most major auto manufacturers have already adopted R-1234yf in several models. For a list, please contact us at FJC. During the next several years, we expect to see R-1234yf adoption rates soar in the US. In response to the EPA’s Significant New Alternatives Policy (SNAP), as of the 2021 model year, US vehicles will no longer be permitted to use R-134a.

As of this writing, R-1234yf is far more expensive than R-134a. However, like most things, these prices will surely drop as its use becomes more common and manufacturing capacities increase. However, with lower system charge amounts, better system integrity and virtually no leakage the amount of refrigerant will likely be less than previously needed.