When your air conditioning system has been open to the atmosphere for a  period of time, it is susceptible to contamination by moisture or foreign particulate.   It is important that the moisture be removed from the system, as it can be extremely harmful to the system components and to the A/C  system operation.   In addition, even microscopic dirt or rust contamination can wreak havoc on the system.  For these reasons, systems will include either a receiver dryer or an accumulator to help remove any moisture or contaminants contained within. 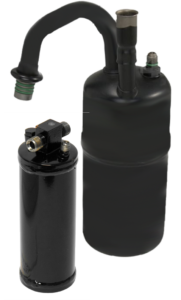 RECEIVER/DRIER
The receiver/drier functions as the filter for the A/C system, removing contaminants and moisture from the refrigerant.  Receiver/driers are always found on A/C systems which have an expansion valve and are located on the high side of the system, usually between the condenser and the internal expansion valve.

The receiver/drier consists of a cylindrical tank (which looks similar to a black metal can), and inside is a solid core filter which contains a drying agent (desiccant) and provides several important functions for the system:

Alternately, many vehicles have an accumulator instead of a receiver/drier.   These systems will have a fixed orifice tube in place of the expansion valve.  Although the function of an A/C accumulator is similar to the receiver/drier, it is designed a bit differently and is typically much larger.  It is located on the low-pressure side of the refrigerant system, receiving low-pressure vapor from the outlet of the evaporator which it then passes along to the compressor.  Some of its functions are:

WHAT TO DO IF YOUR DESICCANT BECOMES SATURATED OR CONTAMINATED?

Because the accumulator or receiver-drier acts as the moisture and particulate filter for your car’s A/C, the best solution for most problems is  to replace the desiccant bag when this is an option.  Alternately, the entire component may need replacement.  Luckily, it’s  an inexpensive part, and replacing it is good for the long-term health of the A/C system.  This part should also be replaced any time you need a new A/C compressor, or have other major work done on the system.

It’s important to note that once you open one of these components and expose it to the outside air, you have destroyed any remaining moisture-absorbing qualities the desiccant may have, necessitating replacement.

What is the Difference Between a Receiver/Drier and an Accumulator?