Choosing the correct lubricant for your Air Conditioning system can be confusing. The move to  more eco-friendly refrigerants and more stringent vehicle engineering standards has led to a number of regulations to manufacturer requirements for A/C compressor oils over the past two decades.  For that reason, we always recommend that you contact the manufacturer to ensure that the correct lubricant is used to avoid damaging the system. 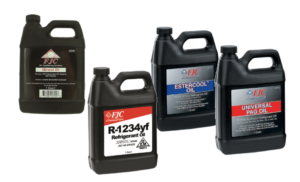 Up until the early 1990s, mineral oil was the lubricant of choice because it mixed easily and well with the R-12 (freon) refrigerant that was universally used at the time.   When R-12 was phased out in 1994 due to its ozone-depleting properties, however, a new refrigerant oil was required which mixed well with the new ozone-friendlier R-134a which took its place.

Summary:  Mineral Oil is used on R-12 systems, primarily on cars built prior to 1995.

Polyelkylene Glycol (PAG) oil is a synthetic oil used by OEMs in their R-134a systems.  PAG oils are harsher than mineral oils, and may cause skin irritation and damage O-rings and seals.  There are different viscosities of PAG oil being used by OEMs: PAG 46, which is the most popular; PAG 100, which is also common; and PAG 150, which is more rarely used.  FJC offers PAG oils in all three viscosities, and also offers each PAG option with Extreme Cold or Fluorescent Dye additives.  FJC also offers a “Universal PAG oil” which is a variable viscosity oil that can replace any of the other three.

Summary:  PAG Oil is used on R-134a systems from about 1995-2015.  Check your manufacturer’s recommendation for proper type of oil as well as specific viscosity.

Because mineral oil and PAG oil cannot be mixed, another A/C compressor oil was needed to bridge the gap for system conversions. The transitional solution was polyol ester oil (“ester” oil or POE).  Ester oil is often called “retrofit oil” because it mixes with  both R-12 and R-134a.  Like PAG oil, Ester oil is a synthetic lubricant. Ester molecules are very stable and have excellent performance characteristics in both high and low temperature environments. Ester oil comes in only one viscosity so it does not include the viscosity numbers associated with PAG oils.  FJC offers Ester oil with Extreme Cold and Fluorescent Dye additives.  Since R-12 was phased out in 1994, vehicles newer than 1995 typically do not contain ester oil as the lubricant for the A/C system.

While R-134a has dominated the U.S. market for the past two decades, it too is beginning to be replaced by a new refrigerant.  Although  R-134a does not deplete the ozone layer, it has been shown to have a high global warming potential (GWP). For this reason, R-1234yf was developed and began to be phased into US vehicles in 2015.  However, just as the discontinuation of R-12 necessitated the use of newer oils, the introduction of R-1234yf has also brought about the need for new specific R-1234yf A/C compressor oils.

The changing environmental regulations has put the onus on shop owners and technicians to be stocked with a wide array of A/C compressor oils, equipment and knowledge to accommodate whichever vehicle rolls into their shop.