Although it may not always seem like it (traffic anyone?) we sure are lucky to be drivers in 2019 when air conditioning comes standard on nearly every car sold in the US…..but it wasn’t always that way!

Throughout much of the automobile’s history, air conditioning was either an overheated-driver’s dream or later, an enviable cutting-edge luxury. Believe it or not, the automotive air conditioners we all take for granted today are the result of a century’s worth of invention, innovation and refinement.

Let’s take a quick look back (in sincere gratitude) at the history and science of keeping cool in cars.

The first patent for a production automobile was issued in 1886. The vehicle lacked many things you’d expect on a car: windshield, roof, doors, steering wheel, gas pedal, brake pedal, AND it only had three wheels. (Needless to say, it also had no A/C.) 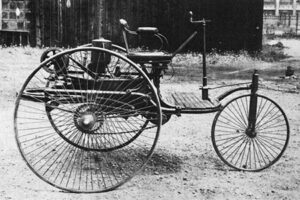 Though cars still lacked any kind of enclosed cabin in 1903, as a precursor to modern-day A/C, drivers would often set up large umbrellas to provide shade and make hot trips at least a little bit cooler.

The Kool Kooshion seat cover was introduced in 1919. This smart device used small springs to hold drivers about a half-inch above the car seat, allowing air to circulate behind and beneath them. It essentially allowed back and bottom sweat to evaporate to help the driver keep cool. (Side Note: If you Google “Kool Kooshion” you’ll see this product is still sold today at many major retailers!)

In 1921 the Knapp Limo-Sedan Fan was a small electric fan that could be added to the inside of a car (by this time most cars were enclosed). Such fans didn’t actually cool the air, though, they merely created a breeze to evaporate sweat thereby make driving in the heat more tolerable.

Nine years later, in 1930, the “car cooler” came along. It was the first product which used the evaporation of water (rather than one’s own sweat) to cool air. The cooler air was then blown in through the open passenger-side window. Though it was the first item to actually lower the auto cabin air temperature, it only worked in areas with very low humidity—and was a bit cumbersome, don’t you think? 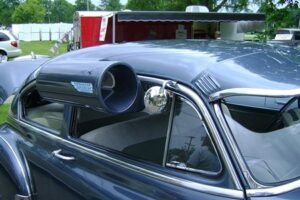 In 1939 Packard became the first car manufacturer to offer air conditioning as an option. These rear-trunk A/Cs required the user to manually install or remove the drive belt from the A/C compressor to turn the system on or off. The option cost a whopping $274 at a time when the average yearly income was $1,368. The price, combined with the start of World War II, caused the option to be impractical and short-lived.

It would be fourteen years later (eight years after the end of the war) in 1953 that A/C finally returned to the automotive industry. Several manufacturers offered A/C as an option, all of them being rear-mounted systems not much different from what Packard first offered in 1939. 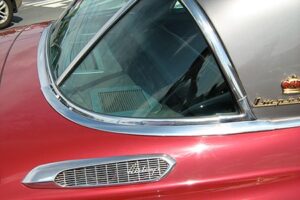 The following year Pontiac and Nash become the first two companies to fit the A/C system in the front of their cars, instead of in the trunk. The Nash system combined the heater and air conditioner into one in-dash system, establishing the standard that most cars have followed to this day.

In 1964 Cadillac introduced “Comfort Control”. For the first time ever, drivers could set a preferred temperature, and the system would automatically adjust the A/C or heater output to keep the car interior at that constant temperature. 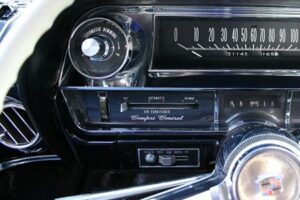 1968 – The AMC Ambassador became the first car to include A/C as standard equipment, rather than an added option….this was startling in the 60s! Chevy, Ford, and Plymouth certainly did not offer standard A/C, and even luxury brands Cadillac and Lincoln only offered the option at an extra cost.

By 1969 over half of all new American cars were sold with air conditioning. (As a point of reference, this was a year after the federal government mandated that all new cars include seat belts in all seating positions)

For the next eighteen years, automotive air conditioning systems remained relatively unchanged. However, in 1987, due to concerns about depletion of the ozone layer, 25 countries signed the Montreal Protocol, providing a plan for the phase-out of the R-12 refrigerant used in most A/C systems. (168 nations are now parties to this historic agreement.) This phase-out opened the door for R-134a refrigerant to officially replace R-12 by 1994. Later, however, it was discovered that R-134a had a deleterious effect on global warming.

Today – R-1234yf has begun replacing R-134a in most automotive A/C Systems. R-1234yf has great cooling properties and a minimal effect on the environment. FJC is on the forefront of this new technology, with a wide range of products to service your R-134a or R-1234yf system.