On December 27, 2020, the American Innovation and Manufacturing (AIM) Act of 2020 was enacted as an unrelated postscript to the Stimulus & Relief bill for COVID.  The AIM Act directed the EPA to address and reduce the use of HFCs (such as R-134a) in an effort to drastically cut climate-damaging greenhouse gases and finally bring the US into compliance with the Kigali Amendment to the Montreal Protocol.  The Act provided directives in several areas, including the phase down of production and consumption of HFCs, management of HFCs and their substitutes, the transition to next-generation technologies, and the reduction in use of non-refillable cylinders.  The final ruling for this Act was issued by the EPA on September 23, 2021.

HFCs are extremely potent greenhouse gases commonly used in refrigeration and air conditioning equipment which contribute greatly towards our current climate crisis.  An 85%  global phasedown of HFCs over the next 15 years  is expected to alleviate 0.5° C (32.9° F) of global warming over the next 75 years.

Although the AIM Act affects many industries—refrigeration, stationery A/C, cold storage, foams and other applications—our focus here is on its effects on the Automotive Air Conditioning market.

The Automotive A/C industry has already been proactive in phasing down HFCs.  Beginning in 2015, automakers have been transitioning from R-134a (an HFC) to R-1234yf (an HFO).  As of model year 2021, all new vehicles sold in the USA use the newer, more environmentally-friendly “yf”.  So the demand for R-134a will continue to fall as older cars transition off the roads….and that’s a good thing—for the environment AND for consumer wallets.  As R-134a becomes less readily available, we anticipate prices to continue to increase.  Luckily, the industry’s move to yf will help alleviate some of these supply/demand disparities.   However, there are still many older vehicles on the roads, and those owners may be hit with sticker shock the next time their A/C needs a charge.   R-134a pricing this year has already skyrocketed in anticipation of the final allocations and concerns about the impact of this legislation for the industry at large.

A final consideration for the A/C aftermarket  as it relates to the AIM Act is the ban on the import, production, and use of non-refillable refrigerant cylinders.  This aspect of the legislation will impose financial and logistical hardships on many facets of the industry.

For these reasons, compliance for the import and fill of these cylinders goes into effect January 2025 and compliance for sale and distribution goes into effect January 2027.   These dates represent a two year “grace period” over the initial proposal.  There are companies who are protesting this aspect of the AIM Act, and the potential of preemptive lawsuits are very real.   We will know more about this before we reach the January 2025 date, but in the meantime it’s important to understand what is on the horizon so we can continue to be proactive. 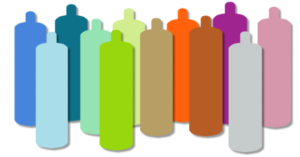