Over the past thirty years environmental regulations have wholly directed the refrigerant industry.  Regulations have controlled the use of refrigerants since they have tended to be substances which either depleted the ozone layer or contributed to global warming.  Included in this oversight has been the phase-out of specific refrigerant classes and the phase-in of their replacements.  In addition, regulations have governed technician training, where and how refrigerants are sold, standards to which equipment is held, as well as safe and efficient refrigerant recovery.  It is illegal to knowingly vent any refrigerant into the atmosphere.

It is widely known that refrigerants can have a damaging impact on the environment.  Refrigerants which contain chlorine (CFCs) have been shown to deplete the ozone layer.  The ozone layer is a protective layer which helps absorb the damaging ultraviolet rays of the sun.  Since life on earth would be untenable without an intact ozone layer, refrigerants containing chlorine were phased out across the globe.  After the phaseout, a different class of refrigerants which did not contain chlorine were put to use—HFCs.  Unfortunately, it was later learned that this class of refrigerants had a very high Global Warming Potential (GWP), and these too are in the process of being phased out.  With the information available to us in 2022, the current refrigerants: natural refrigerants and HFOs , do not appear to have a negative affect on the environment.

But what about all of the old automobiles, trucks, buses, trains, HVAC and refrigeration systems that are still in use with the older refrigerants?  Without refrigerant recovery, these would continue to vent into the atmosphere when the systems which contain them leak, are serviced,  or when they are past their useful life and disposed.  Instead, the gas is recovered using a specialized recovery machine, and temporarily stored in recovery tanks.   Refrigerant that is recovered can be reused in the system from which it was taken (if that system simply needed a repair to continue working).  However, in order to reuse that refrigerant in another system or  to sell it on the market, the recovered refrigerant would need to be recycled or reclaimed.

Refrigerant recycling involves cleaning the refrigerant in the field.  Any oil or additive would be separated from the refrigerant.  Recycled refrigerant can only be used on equipment owned by the same owner from which the refrigerant was originally recovered because it does not meet all the requirements of reclamation.

Reclamation, on the other hand, is a process in which the recovered refrigerant is reprocessed to at at least the purity level required in the AHRI standards for a virgin refrigerant.  This purity must be tested and certified before the refrigerant can be reintroduced into the market. 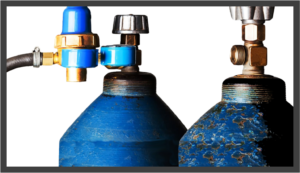