Refrigerants are substances that are used in an A/C cycle to cool the car cabin. They are responsible for capturing heat and releasing it to another area by using the thermodynamic phenomena of phase changes wherein fluid continually changes into vapor and back to a liquid.  Environmental aspects are increasingly being taken into consideration by OEMs in refrigerant choice. Refrigerants are therefore ranked according to their impact as greenhouse gases (the Global Warming Potential, GWP) or their impact on the stratospheric ozone layer (the Ozone Depletion Potential, ODP). 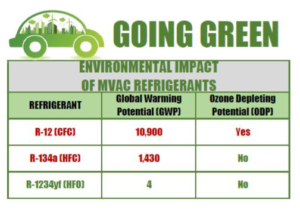 Global Warming Potential (GWP)  is a measure of the amount of heat a gas will trap in the atmosphere over time as compared to carbon dioxide. Emissions from some refrigerants are contributors to global warming because they absorb infrared radiation and hold it in the atmosphere. This is called the greenhouse effect because it traps heat in our atmosphere instead of letting it escape into space.  Carbon Dioxide has a baseline GWP of 1, therefore, a gas that has a GWP that is higher than 1 traps more heat than CO2.

Ozone Depletion Potential (ODP) is the measure of how much a substance causes the stratospheric ozone layer to degrade as compared to R-11, which has a baseline ODP of 1.  Therefore a chemical with an ODP over 1.0 will degrade the ozone layer more than R-11.  The ozone layer protects living things from the sun’s harmful ultraviolet radiation and protecting it is vital.  Refrigerants containing chlorine (C )contribute to the breakdown of the ozone layer .

Over the years, automotive air-conditioning systems have used three refrigerants:

R-12 (Freon) is a CFC which was found to significantly contribute towards the depletion the ozone layer.  Its damage is magnified because CFCs have a very long lifetime before breaking down in the atmosphere.  In 1987 the Montreal Protocol was signed by 197 nations to phase out CFCs by 1995.  All vehicles manufactured after 1994, therefore, use one of the two following refrigerants.

R-134a is an HFC which replaced R-12 in vehicles produced after 1994.  It was later discovered that R-134a has an extremely high GWP and contributes greatly to climate change.  In 2016 the Kigali Amendment was introduced with the 197 UN countries agreeing to take steps to phase out HFCs in favor of low-ODP/low-GWP options.  Despite the fact that some countries, including the US, have yet to ratify the amendment, new generation automotive refrigerants (see below) are currently being used in 70% of vehicles manufactured today.  This is an example of the industry policing itself to better serve the interests of the environment.

FJC aftermarket products support A/C systems which use R-12, R-134a and R-1234yf.  Over time we have seen a rapid decline of R-12 vehicles on the road and so demand for these products has dropped precipitously.  Since R-134a vehicles are aging, we are currently experiencing highest demand in this market segment, with a consistent uptick in interest in our R-1234yf, which we anticipate will continue to trend upwards.