When you’re in the A/C business (like we are) the distinction between coolants (antifreeze) and refrigerants is abundantly clear.  However, so many people ask us to distinguish between them that we’ve decided to set the record straight once and for all. While both systems utilize aspects of heat transfer, and both are involved in the heating, ventilation, and air conditioning system (HVAC) of a vehicle, the differences between coolant and refrigerant are significant. 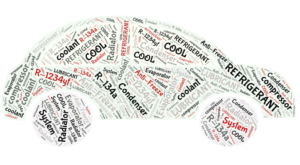 Antifreeze is one of the components of a coolant mixture (coolant is generally a 50/50 mixture of antifreeze and water). Antifreeze is used to lower the freezing point and raise the boiling point of the liquid that circulates around the engine of a vehicle. This helps prevent the engine from freezing during cold weather. The coolant also keeps the internal parts of the engine lubricated so that they work smoothly. Antifreeze is either green or orange, and stays in liquid form.

Summary:  The objective of coolant is to keep the engine from freezing.  It is a liquid comprised of anti-freeze and water.  It is necessary to replace the coolant from time to time to protect your engine.

A refrigerant is a substance or mixture used in an air conditioning system.  It works in a cycle and undergoes phase transitions from liquid to gas and then back again based upon the pressure applied to it.  These phase changes cause the refrigerant to absorb and release heat throughout the cycle.  Today automobiles use either R-134a (which is being phased out) or R-1234yf refrigerants.   Refrigerant has a very, very low boiling point.

Summary:  The objective of refrigerant is to cool the cabin of the vehicle for passenger comfort.  The refrigerant and refrigerant oil is contained in a closed A/C system and changes phases throughout the process, absorbing and releasing heat as it goes.