AIR CONDITIONING – A system for controlling temperature, ventilation  and humidity in a vehicle through condensation.   Typically used to maintain a cool atmosphere in warm conditions.

AMBIENT TEMPERATURE – Temperature of the surrounding air, or outside air temperature

ATMOSPHERIC PRESSURE – Pressure exerted by weight of air and liquid at various altitudes.

BOILING POINT – Temperature at which a liquid boils and changes to a vapor.

BTU – British Thermal Unit. A measure of the heat required to raise temperature of one pound of water 1°F.

CAN TAP— A dispensing tap for cans.  Taps are specific to the type of refrigerant gas.  Since 2018 all can taps are for self-sealing cans. 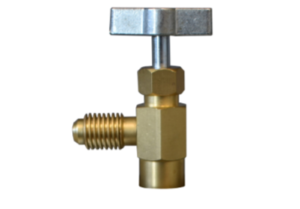 CELSIUS – Thermometer scale in which water freezes at O° and boils at 100°.

CHARGE – Amount of refrigerant by weight or volume that a system holds.

CHARGING HOSE—Made of high-quality brass and rubber, these reusable and durable hoses provide tight connections, and ensure  safety and convenience when testing, diagnosing or charging a system.  Available in a variety of lengths.

COMPRESSION – Reduction in volume caused by an increase of pressure of a gas or vapor.

CONDENSATION – Conversion of a vapor or gas to liquid.

CONDENSER – An apparatus in which refrigerator gives off heat by being changed from a gas to a liquid.

CONDENSING PRESSURE – The pressure at which the refrigerant changes phase from gas to liquid.

CONDENSING TEMPERATURE – The temperature at which the refrigerant changes phase from vapor to liquid.

CONDUCTION OF HEAT – Transfer of heat through physical contact at the molecular level.

CYLINDER HEATER— An electric sleeve which slips over refrigerant cylinders to maintain a constant temperature and assure a full discharge due to pressure applied.

DENSITY – Weight or mass of a gas liquid or solid.  The quantity of mass per unit volume.

DESICCANT – A hygroscopic substance used as a drying agent inside air conditioning systems to absorb and hold moisture.

DISCHARGE LINE – The refrigerant line which carries the discharge refrigerant from compressor outlet to condenser inlet.

EVACUATE – A vacuum created to remove air and moisture from the system.

EVAPORATION – Process of changing a liquid to vapor.

EVAPORATOR – A/C component in which liquid refrigerant changes to a gas as it absorbs heat from inside air.

FAHRENHEIT – Thermometer scale in which water freezes at 32° and boils at 212we°.

FILTER – A device used with the drier to provide filtration and absorbs contaminants such as water. 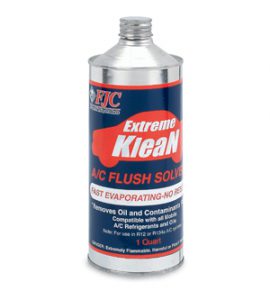 GAS – A substance in its vapor phase, as distinguished from liquid or solid state.

HIGH SIDE – Side of A/C system which carries pressurized refrigerant and includes compressor, condenser and receiver drier.

LATENT HEAT – Amount of heat required to change a substance from one phase of matter to another without a change of  temperature.

LATENT HEAT OF CONDENSATION – Amount of energy released when a substance changes from vapor to liquid.

LATENT HEAT OF FREEZING – Amount of energy released when a substance changes from liquid to solid, without a change of temperature.

LATENT HEAT OF VAPORIZATION – Quantity of heat energy required to change a liquid into a vapor without raising temperature.

LIQUID LINE – Pipe, tube  or hose which carries the liquid refrigerant from the condenser to expansion valve/orifice.

LOW SIDE – (or Suction Side) The portion of A/C system from compressor and evaporator.

LUBRICANT—Oil designed to lubricate automotive air conditioner compressors.  Available in a variety of types, viscosities, straight  and with additives depending upon the application.

MANIFOLD GAUGE SET – A device comprised of a set of gauges for testing or measuring pressure or vacuum. 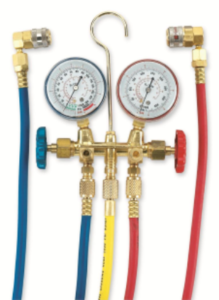 OIL AND DYE INJECTOR—A tool used to add oil or dye to a system without adding refrigerant.

OIL CHARGE— A refrigerant charge which contains a system lubricant

PRESSURE – Physical force exerted against an object, such as force upon a liquid which increases the liquid’s boiling point.

PSI – A unit of pressure expressed as pounds per square inch.

R-1234yf – Synthetic HFO refrigerant used in most vehicles after 2015.

RAM AIR – Air which is forced around the condenser coils.

RECEIVER DRIER – A liquid storage tank for the refrigerant flowing from the condenser.

RECOVERY EQUIPMENT – A mechanical system that generally consists of an evaporator, oil separator, compressor, and a condenser which removes refrigerant from a refrigeration system and into a storage tank.

REFRIGERANT – Liquid or gas used in refrigeration system which produce cold by heat transfer.  Most common refrigerants in automotive A/C are R-134a and R-1234yf.

REVERSE THREAD—A left-handed thread, as seen on R-1234yf cylinders, cans and dispensers.  The reverse thread is intentional to prevent accidental contamination with another refrigerant or gas.

SCHRADER VALVE – Spring-loaded valve which allows airflow in only one direction.  It consists of a threaded hollow cylindrical metal tube with a metal pin.  Commonly used for tire inflation, and also in self-sealing refrigerant can dispensers.

SELF-SEALING VALVE—A Shrader valve on top of refrigerant cans mandated by the EPA since 2018.  The valve automatically reseals the can when dispensing equipment is removed to minimize refrigerant venting into atmosphere. 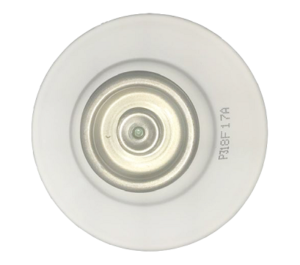 SIGHT GLASS – Window in receiver-drier or in liquid line to observe refrigerant flow.

STARVED EVAPORATOR COIL – A condition in which not enough refrigerant has been supplied to the coil, resulting in poor operation and too-low heat exchange.

STOP LEAK:  A formula added with or without refrigerant to seal leaks in metal and rubber A/C components.

SUCTION SIDE – Low side of system (The portion of A/C system from compressor and evaporator).

SUCTION THROTTLING – Control used to regulate flow of refrigerant from the evaporator to the condenser.

SUPERHEAT – Added heat intensity to a gas after complete evaporation of a liquid; controlled by increasing pressure in air conditioning systems.

TAIL PIPE – The outlet pipe from the evaporator coil.

TOTAL HEAT LOAD – Human heat load plus additional heat which enters through the floor, glass, roof, and sides of vehicle.

UV DYE—An A/C additive which requires a UV light to indicate the area of a leak. 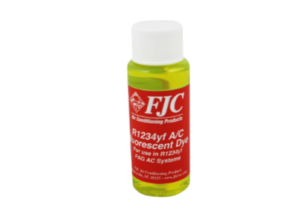 VACUUM – Referred to as less than atmospheric pressure and expressed as inches of mercury.

VISCOSITY – The measure of resistance of a fluid to flow.