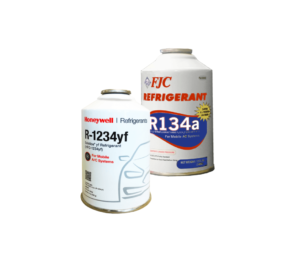 One of the compelling reasons R-1234yf was overwhelmingly chosen to replace R-134a in automotive air conditioning systems is because there are not really many differences between the way the systems are designed and work.  There are a couple minor component changes in the Thermal Expansion Valves (replace orifice tubes or expansion valves) and Condensers, but overall the system will be familiar to anyone who works on A/C systems. The service ports in both systems are quick-connect, but they are taller in the yf systems to avoid cross-contamination.

Another difference is that yf Evaporators must meet SAE Spec J2842, which was not an issue in R-134a systems.

A final difference is that most (though not all) R-1234yf cars will have a Suction Line Heat Exchanger.  This part is part of the line assembly and is designed to improve efficiency.  They have no moving parts.

The pressure/temperature curves for R-1234yf and R-134a are very similar.  As illustrated in the chart below, the curves below run together nearly throughout the curve, only slightly breaking paths at around 250 psig/150 degrees and above 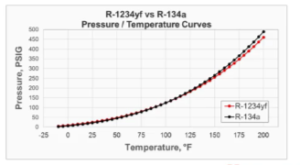 R-1234yf has been designated as MILDLY flammable.  This simply means that it could ignite if it comes in contact with an open flame.  It is important to note that it does have a low burning velocity and low heat or combustion.  It has a very low pressure rise and the flame is very slow moving (less than 10cm/sec.)  Compared to other liquids/chemicals/gases in a shop, it  is an EXTREMELY slow moving flame.  It has low volume in a vehicle, and low impact flammability.  By comparison, and as illustrated in the chart below, it has the significantly  lowest flammability impact of the following common automotive fluids:  gasoline, diesel, engine oil, transmission fluid, and power steering fluid. 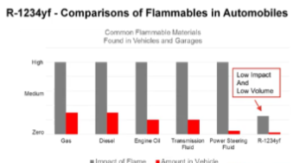