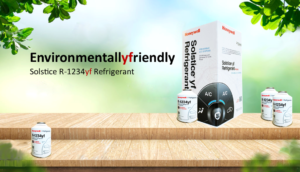 Pollution is the introduction of substances which cause adverse changes in the environment or living organisms.  We’re all familiar with contaminated waterways,  improper waste disposal, and noise and light pollution.   We are going to focus on  the role refrigerants play in air pollution—and steps the industry has taken to become more environmentally sustainable.

Air is a mixture of oxygen, nitrogen, carbon dioxide and inert gases, and it plays a vital role in respiration.  Some air pollutants are smog and soot—which are irritants that can cause respiratory problems and cardiovascular disease.  Other pollutants, like some refrigerants, affect the atmosphere—the envelope of gases which surround the earth—and harm at this level can cause varying levels of harm to life on earth.

Until the mid-1990s, automotive air conditioners  used the refrigerant R-12 (CFC), which exhibited high ozone depleting potential due to the chlorine it contained.   The ozone layer is a region of the stratosphere which contains a high concentration of ozone.  This layer absorbs most of the sun’s ultraviolet radiation.  Ozone depletion is the thinning of this layer through chemical reactions.  Therefore, to protect the earth from the harmful UV radiation which would pass through a depleted ozone layer, in 1996 R-12 was completely banned under the Montreal Protocol.  In its place, R-134a became the refrigerant of choice.

R-134a was the primary refrigerant used in automotive air conditioning systems until about 2015.  At that time it became clear that although this refrigerant did not have a negative effect on the ozone later, it did, in fact, have a high global warming potential, which is also harmful to life here on earth.    Global warming is the phenomenon of increasing average air temperature near the earth’s surface.  Unfettered global warming would result in increased extinction of plant and animal species, shifts in agriculture patterns, and rising sea levels.  In 2015 the Paris Agreement brought most of the world’s developed countries to a legally binding agreement to control the greenhouse effect, a warming of the earth’s surface and lower atmosphere due to heat trapped in the atmosphere.  In addition, 2016 saw a legally binding international amendment to the Montreal Protocol—The Kigali Amendment.  This accord called for the phase-down of HFCs, like R-134a.

In anticipation of these initiatives the global refrigerant industry was working diligently to develop an environmentally friendly refrigerant—one which did not deplete the ozone layer or contribute to global warming (and which was still safe to use, unlike propane or butane which are highly flammable).  R-1234yf was borne from these initiatives.

R-1234yf (HFO) is environmentally friendly:  it breaks down into the same byproducts of most other fluorinated compounds—at much lower levels.  F atoms degrade into HF which is then rained out and mineralized with no additional affect on ozone or climate.   Its atmospheric lifetime is approximately 11 days (vs 13 years for R-134a).   In addition to its superior environmental performance, it is safe to use in automotive applications.  Its pressure and temperature properties are so similar to that of R-134a, the two systems work nearly identically, however the service ports are different, and its accessories use a reverse thread  – both to help avoid accidental contamination of the refrigerant.

During the past six years, R-1234yf has been slowly adopted by automakers in advance of the 2021 MY mandate.   As older vehicles have aged, and continue to age off of the road, we have already experienced reversal of some of the damage to our atmosphere caused by previous refrigerants.  Over time, these improvements will become even more significant due to R-1234yf.